Last summer in 2015, Keidanren sent a large mission to the United States consisting of over 100 company leaders and executives to Washington, DC and 14 cities in 10 states, and reaffirmed the importance of Japan-US relations and the scale of Japanese companies' contribution to the US economy. This year, as a follow-up to last year's mission, Keidanren sent another mission participated by 42 corporate executives from 23 member companies to Washington, DC, Denver, Colorado, and Seattle, Washington in the United States and to Ottawa in Canada from May 22 to 28, led by Mr. Kunio Ishihara, Chair of Committee on U.S. Affairs, Mr. Haruo Murase, Chair of Committee on U.S. Affairs and Committee on Canada, and Mr. Akio Dobashi, Chair of Committee on Canada.

This mission had three primary objectives: 1) following from the last year's mission, to highlight the importance of Japan-US relations and Japanese companies' contribution to the US economy, and strengthen the relationship with local state governments and the business community; 2) to strengthen relations with the new Trudeau administration inaugurated in November 2015 and with the Canadian business community, through Keidanren's first mission to Canada in 20 years; and 3) above all, to urge US and Canadian officials to expedite their respective domestic procedures for the swift entry into force of the Trans-Pacific Partnership (TPP) agreement. 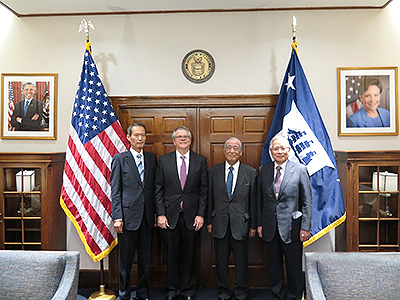 The mission met and discussed with the high-rank US federal government officials, including Mr. Bruce H. Andrews, Deputy Secretary of Commerce, Ms. Catherine A. Novelli, Under Secretary of State for Economic Growth, Energy, and the Environment, and Mr. Bruce Hirsh, Assistant US Trade Representative for Japan, Korea, and APEC, regarding the status of the US efforts to obtain congressional approval of the TPP. All agencies spoke along the same lines, emphasizing that they were working hard to coordinate with Congress and relevant industries towards the passage of the TPP bill by the end of this year, which is a top priority of the Obama administration. On the other hand, think tanks such as the Center for Strategic and International Studies (CSIS) and the Brookings Institution were pessimistic about the passage of the TPP bill within 2016, based on the observation on negative rhetoric about free trade being reiterated during the presidential election campaign.

During the exchanges of views with Mr. Jay Timmons, President and CEO of the National Association of Manufacturers (NAM), the two sides shared the view that the TPP was important for both the Japanese and US economies. President and CEO Timmons said more seamless supply chains contribute to strengthening small- and medium-sized enterprises and that is the most effective issue for promoting the TPP. 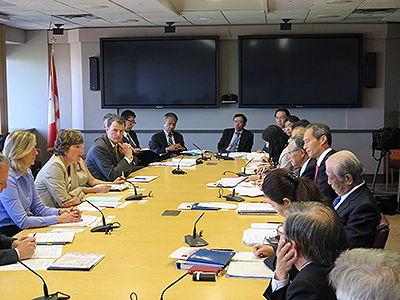 Exchanges of views with Deputy Minister of International Trade of Global Affairs Canada Hogan and others (Ottawa, Canada)

Ms. Christine Hogan, Deputy Minister of International Trade of Global Affairs, Canada, expressed high expectations that the TPP Agreement would further deepen the economic ties between Japan and Canada. She explained that consultations were actively being held with various stakeholders in all parts of Canada to broaden the understanding of the TPP.

On the other hand, the members of the Canadian business community (Business Council of Canada and Canadian Chamber of Commerce) perceived that while it highly valued the significance of the TPP, its swift approval in the United States would be extremely difficult due to the effects of the US presidential election, among other factors. The Canadian business community strongly underscored that if the TPP would not be realized for some time to come, then the Japan-Canada EPA negotiations suspended since November 2014 should be resumed. This led to exchanges of views with Keidanren mission members maintaining that top priority should be given to the TPP.

Chosen as the No. 1 city for business climate by a business magazine, Denver is home to an array of industries, including aerospace as well as energy, bioscience, and information technology, and is seeing a revitalization of its economy. In light of these achievements, exchanges of views took place with Governor John Hickenlooper and officials from the Metro Denver Economic Development Corporation and Metro Denver Chamber of Commerce. They explained about the business opportunities that Colorado and Denver could provide. The two sides agreed that Japan and the United States should provide explanations about the opportunities and advantages that the TPP would bring to both Japan and Colorado.

Seattle, particularly with its ports, is a thriving trading hub. Historically, by nature, the city has been a strong supporter of free trade, and many Japanese companies, primarily in the aerospace and food processing industries, have established businesses there. The mission exchanged opinions with senior Washington state and government officials as well as Seattle and Tacoma port authorities regarding the role played by ports and other infrastructure in the local economy. Furthermore, they shared their expectations that the TPP would further expand business opportunities. The mission also visited the manufacturing plant for Boeing 787, the development and manufacturing of which many Japanese companies are involved.

During the visit to Washington, the mission had an opportunity to meet with Congressman Dave Reichert, who serves as Chairman of the House Subcommittee on Trade, Committee on Ways and Means and was appointed Co-Chair of the US-Japan Congressional Caucus. The mission was heartened by Congressman Reichert's explanation that he was coordinating with government and relevant industries daily for the TPP's congressional approval, and that both the Obama administration and Congress were giving top priority to these efforts.

Following on from last year, the mission's visit to not only Washington, DC but also to US states allowed Keidanren to reaffirm the importance of Japan-US relations and Japanese companies' contribution across the United States. In addition, it helped lay the foundation for cooperation on policy issues, including the TPP. The dispatch of a mission to Canada for the first time in a long time also provided an impetus for further strengthening Keidanren's collaboration with Canada. It is important that these efforts are sustained, and Keidanren will continue to carry out and develop these activities next fiscal year and beyond.