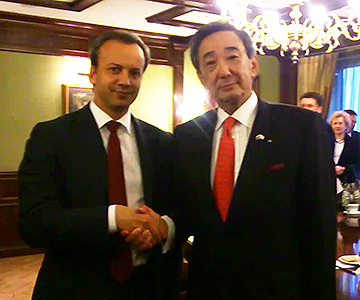 Recent developments have suddenly given momentum to deepening Japan-Russia economic cooperation, including Prime Minister Shinzo Abe's proposal of an eight-point cooperation plan* to President Vladimir Putin which was highly praised by the President during the Japan-Russia summit meeting in May 2016. Against this backdrop, from 8 to 10 June, Keidanren (Chairman Sadayuki Sakakibara) dispatched a business delegation to Moscow headed by Chair Teruo Asada of the Japan-Russia Business Cooperation Committee. Policy dialogues took place with economy-related ministers of the Russian Federation, including Deputy Prime Minister Arkady Dvorkovich, as well as with leaders of the business community, and others.

An overview of the inaugural meeting held before the dispatch of the delegation and of the mission itself is as follows.

At the inaugural meeting, Mr Hajime Hayashi, Director-General of the European Affairs Bureau of the Ministry of Foreign Affairs, and Mr Hirofumi Katase, Director-General of the Trade Policy Bureau of the Ministry of Economy, Trade and Industry, briefed the delegation on matters such as Russia's political and economic situation and the Japan-Russia economic relationship.

Director-General Hayashi began by providing a comprehensive explanation of Russian domestic affairs, including the State Duma (lower house) elections scheduled in September, as well as Russia's recent foreign policy, the outcomes of Prime Minister Abe's visit to Sochi, and other Japan-Russia relations. Director-General Katase presented a detailed explanation of Russian economic trends, the situation of Japan-Russia trade and investment relations, energy cooperation, among other topics. 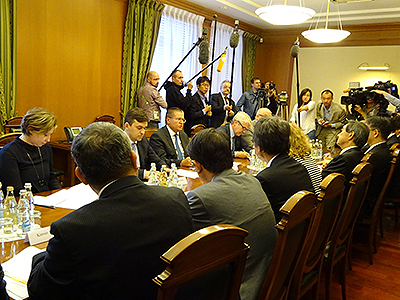 The talks with Minister of Economic Development Alexey Ulyukaev

On 8 June, after arriving in Moscow, the delegation received an explanation of the local situation from Mr Toyohisa Kozuki, Ambassador Extraordinary and Plenipotentiary of Japan to Russia.

On the following day, 9 June, the delegation held talks with Deputy Prime Minister Dvorkovich at the Russian White House. Mr Asada, head of the delegation, noted that major developments are heralding a new phase in the bilateral relationship, and in this context, Japan looked forward to substantiating projects related to the eight points. Deputy Prime Minister Dvorkovich responded positively, "At this time, the eight points are being studied by the relevant Russian ministries and agencies which share a strong interest in the eight points. All sectors have high potential. We would like to propose projects especially in sectors such as transport, agriculture, and energy."

In addition, the Deputy Prime Minister stated that based on the "Fundamental Approach to Japan-Russia Economic Relations" proposal Keidanren unveiled in December 2015, "The federal government will take steps to remove barriers in the business environment in Russia, also taking into consideration the wishes of Japanese companies."

At the talks held later with Minister of Economic Development Alexey Ulyukaev, the Minister explained, "The government is carefully studying the eight points. We are preparing detailed and concrete proposals that would serve as a basis for increasing bilateral trade through large-scale investment projects."

On 10 June, the delegation held talks with Minister of Industry and Trade Denis Manturov. The delegation raised specific problems with respect to: Russia's disposal tax introduced in May 2016 on imported or locally manufactured motor vehicles and construction machinery; and requirement for import substitution and increasing local production. The delegation encouraged improvements in the business environment. The Minister accepted the delegation's proposals and instructed relevant directors-general in attendance to take necessary actions.

During the talks with Minister for the Development of the Russian Far East Alexander Galushka that followed, the Minister provided a detailed explanation of the incentives of investing in the special economic zones in the Russian Far East, transport routes, and other matters. Active exchanges of views took place with the delegation members over individual projects in sectors such as wood processing, port development, medicine, and food products.

Achievements of the mission and the way forward

During this mission, constructive and substantive policy dialogues were conducted with four economy-related ministers and others who play key roles in the Japan-Russia economic relationship. Taking also into account Keidanren's "Fundamental Approach," the delegation raised with them specific problems with the business environment owing to factors such as the Russian government's import substitution policy. In response, the Russian government committed to taking steps to improve the situation. Additionally, the mission succeeded in laying down the groundwork for making progress on specific projects related to the eight points.

Keidanren will continue to hold a series of policy dialogues with the Russian government and business community in working towards the realisation of various projects.