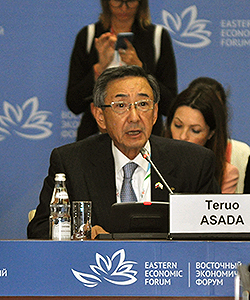 Recent developments have given momentum to promoting Japan-Russia economic cooperation, including Prime Minister Shinzo Abe's proposal of an eight-point cooperation plan* to President Vladimir Putin which was highly praised by the President during the bilateral summit meeting in May 2016. Against this backdrop, from 2 to 3 September, Chair Teruo Asada of the Japan-Russia Business Cooperation Committee of Keidanren attended the Eastern Economic Forum held in Vladivostok and delivered a speech at the Russian-Japanese Business Forum on behalf of Keidanren.

The Eastern Economic Forum was established in 2015 under the auspices of President Putin who regards the development of the Russian Far East as one of the highest priorities of the national strategy. This year, the second Forum was attended by approximately 3,500 members of governments and companies from 56 countries, including President Putin, Prime Minister Abe, and President Park Geun-hye of the Republic of Korea, as well as 1,100 members of the press. The following is an overview of Chair Asada's speech at the Business Forum attended by approximately 350 participants from Japan and Russia, including Minister of Industry and Trade Denis Manturov and Minister for the Development of Russian Far East Alexander Galushka.

Assessment of the Eight-Point Plan

The eight-point plan proposed by Prime Minister Abe represents a platform to begin a new stage in Japan-Russia cooperation, as well as to deepen and expand the bilateral economic relationship. In June, Keidanren dispatched a business delegation to Moscow. The delegation conducted constructive exchanges of views with Russian government ministers and leaders of the business community, and in doing so, laid down the groundwork for specific projects.

The public and private sectors in Japan and Russia are beginning to make collective efforts to realize the eight-point plan. Likewise, Keidanren will be actively engaged in the efforts for realizing projects, holding a series of policy dialogues with the Russian government and business community ahead of President Putin's visit to Japan by the end of 2016.

Current Situation of the Japan-Russia Economic Relationship and Its Challenges

While the weakening of the ruble has improved the price competitiveness of Russian products, trade between Japan and Russia decreased in terms of value significantly in FY2015, down 38.9% from the previous year, due to falling oil prices and other impacts. In 2015, Japanese direct investment in Russia increased for the first time in three years to US$439 million (up by approximately 62% year-on-year). Japanese companies' expansion into the non-manufacturing industry has been particularly pronounced. This trend is considered to reflect the maturation of the Russian market and the diverse needs of consumers.

Russia has ceaselessly striven to improve its business environment since acceding to the WTO in 2012. However, it is also true that observers point to the still complicated nature of Russia's legal system, administrative procedures, and export and import procedures. Keidanren would like to take this opportunity to once again ask for further improvements in the business environment.

Japanese companies' interest in the Far East has steadily grown, with more than half of the companies that responded to a Keidanren questionnaire survey answering that the Far East is a promising region. For the special economic zones to unleash the maximum effectiveness, Russia is urged to swiftly introduce a simplified visa scheme, promote infrastructure development, and ensure smooth administrative procedures when moving into special zones, among other efforts.

The development of the Far East constitutes an important component of the eight-point plan, and whether or not the development is successful serves as a touchstone that influences the outcome of the overall Japan-Russia economic relationship. The Japanese business community hopes that the Russian government will take steps from an investor's perspective, including developing systems that guarantee returns commensurate with investment.