Keidanren sent a mission to Cuba (Havana) and Mexico (Mexico City and Guadalajara) from August 5 to 11, consisting of 42 business executives led by Mr. Toshiyuki Shiga, Chair of the Japan-Mexico Economic Committee.

With the United States gradually relaxing its economic sanctions against Cuba, expectations are growing for the creation of new business opportunities in that country. It was under these circumstances that Keidanren sent its first ever mission to Cuba to gather information that will be useful for developing businesses there in the future. 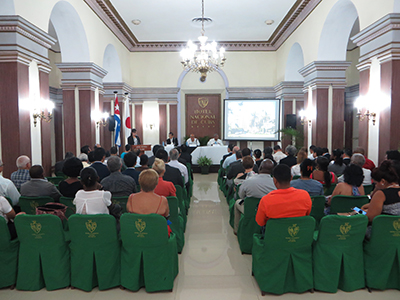 While in Cuba, the mission met with Vice-President of the Council of Ministers of the Republic of Cuba, H.E. Mr. Ricardo Cabrisas Ruiz, and President of the Cuba-Japan Parliamentary Friendship League, Dr. Carlos Manuel Gutierrez Calzado, who also serves as President of BioCubaFarma. The mission also jointly hosted a Japan-Cuba Business Forum with the Chamber of Commerce of the Republic of Cuba. The Cuban side stressed that, as a result of the restoration of diplomatic relations with the United States and the resolution of its debt problems, the barriers to strengthening relations between Japan and Cuba had been removed. They also explained that Cuba was in the process of establishing a better business environment, with the enactment of foreign investment legislation and the establishment of the Mariel Special Development Zone, and expressed hope for the expansion of trade and investment between Japan and Cuba. The Japanese side pointed out the need for improvements to the business environment, such as the early conclusion of a Japan-Cuba Investment Agreement and the lifting of the ban on direct employment.

Thanks to Mexico's favorable geographical location in the center of the American continents facing both the Pacific and Atlantic Oceans, its plentiful, young workforce, and its many free trade agreements, including the North American Free Trade Agreement (NAFTA) and the Japan-Mexico EPA, there are a large number of Japanese companies operating in Mexico, particularly in the automotive industry. Recently, with the Peña Nieto regime's progress in structural reforms, combined with the fact that both Japan and Mexico are signatories to the Trans-Pacific Partnership (TPP) agreement, expectations have risen for the further deepening of the industrial cooperative ties between our two countries. It was in light of these circumstances that Keidanren sent a mission to Mexico for the first time in two years, where they explored the potential for further business growth in a wide range of industries.

In Mexico City, the mission met with Secretary of Economy, Dr. Ildefonso Guajardo Villarreal, Secretary of Tourism, Mr. Enrique De La Madrid, and Chairman of the Mexican Business Council for Foreign Trade, Investment and Technology (COMCE), Mr. Valentín Díez Morodo. They also held talks with key figures from the public and private sectors, including senior bureaucrats from the Secretariat of Energy and senior executives of ProMéxico, and with the association of Japanese Mexican, the Mexico-Japan Society. In these various discussions, the Mexican side explained that many business opportunities existed in Mexico, particularly in the energy sector, where reform is underway, and expressed hopes for the expansion of investment in a wide range of industries, not just the automotive sector. In response, the Japanese side asked for further improvements to the business environment. The two countries also confirmed the importance of leading the way by expediting their respective domestic procedures for the swift entry into force of the TPP. While in Mexico, the mission concluded a memorandum of understanding between Keidanren and its counterpart, COMCE, for full cooperation, including active exchanges of people, for further development of the two country's economies. 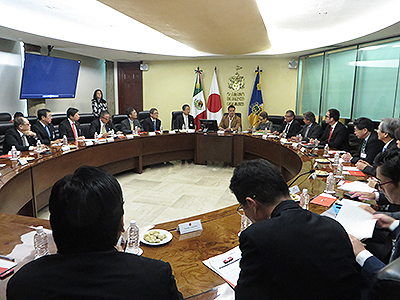 Meeting with the Governor of the State of Jalisco, Mr. Aristóteles Sandoval.

In Guadalajara, the mission met with the Governor of the State of Jalisco, Mr. Aristóteles Sandoval, and visited companies that are operating there, such as Daido Metal Mexico. Through these activities, they learned about the attractions of developing businesses in the area. Some of the mission members also held discussions with the state government about investment and tourism, where high hopes were expressed that Japanese companies would expand their operations in the future.

The mission was a major step towards deepening economic ties with Mexico and Cuba. Keidanren will continue to deepen its relationships with these two countries going forward.