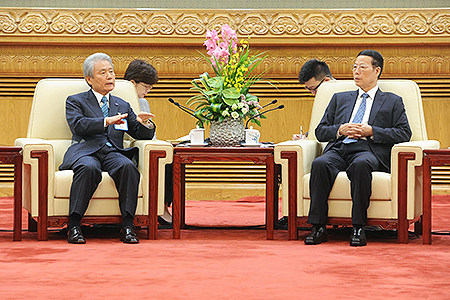 From September 21 to 23, Keidanren (Chairman: Sadayuki Sakakibara) sent a business delegation to China, jointly with the Japan-China Economic Association (JCEA) and the Japan Chamber of Commerce and Industry (JCCI). Delegations from the business community have visited China annually since 1975, and the three organizations have been sending a joint delegation since 2015. This year, 230 people from 69 companies comprised the delegation, including Chairman Sakakibara, Chairman Shoji Muneoka of JCEA, and Chairman Akio Mimura of JCCI.

The business delegation held talks with Vice Premier Zhang Gaoli, and held meetings with high officials of the National Development and Reform Commission, the Ministry of Commerce, the Ministry of Industry and Information Technology, and others.

At the talks with Vice Premier Zhang Gaoli in the afternoon of September 21, Chairman Sakakibara made requests and asked questions regarding four items: (1) establishment of favorable and stable political and diplomatic relations through holding intergovernmental dialogues regularly and continuously, including Japan-China summit meeting; (2) implementation of structural reforms of the Chinese economy, including innovation promotion and elimination of overcapacity, and roadmap of future growth; (3) further development of the business environment; and (4) promotion of economic partnership agreements, such as the Japan-China-ROK free trade agreement (FTA) and the Regional Comprehensive Economic Partnership (RCEP).

Vice Premier Zhang Gaoli responded by extending a heartfelt welcome to the delegation on behalf of the Chinese government. The Vice Premier stated that both sides should work to develop the bilateral relationship in the right direction, and that China wishes to make efforts towards high-level dialogues and intergovernmental exchanges. With regard to China's economic prospects, the Vice Premier emphasized that China would actively advance structural reforms including elimination of overcapacity. In addition, the Vice Premier vowed that China will realize medium- to high-speed growth, accelerate negotiations on the Japan-China-ROK FTA and RCEP, and improve the business environment in China.