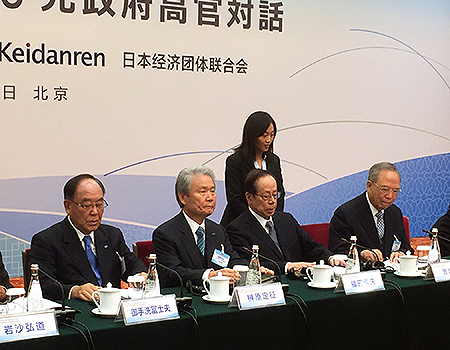 Chairman Sakakibara delivered an address, stating, "Japan and China are mutually indispensable partners that have an extremely close relationship, and efforts will continue to be made to further develop our cooperative relations in the economic and industry areas. For this to happen, it is vital that the heads of leading companies in Japan and China further enhance mutual understanding through a series of dialogues, and deepen discussion to flesh out new measures for collaboration and cooperation."

Chairman Zeng remarked, "It is critical that we make use of various opportunities to promote exchanges and take proactive actions from a long-term perspective in order to strengthen China-Japan relations. The Chinese and Japanese business communities must build upon the efforts of their predecessors in holding active economic exchanges, deepening mutual understanding, and building up momentum for further improving the bilateral relationship."

Premier Li stated that candid and constructive dialogues among business leaders play a significant role in strengthening China-Japan relations, and that he expects companies in the two countries to contribute to developing the bilateral relationship from the economic domain by enhancing mutual understanding through dialogue.

During the two-day meeting, the two sides exchanged constructive and frank views regarding the current situation and the outlook of the Japanese and Chinese economies, as well as future measures for expanding and furthering bilateral economic and industry cooperation in such areas as "trade, investment, and finance," "innovation," and "infrastructure, energy and environmental protection." A joint statement was also compiled that summarizes these discussions.

* The joint statement is available on Keidanren's website.
http://www.keidanren.or.jp/policy/2016/097.html (Japanese)