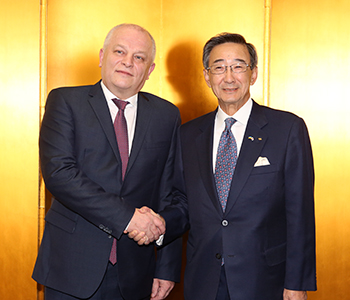 A visit by a trade mission from Ukraine, headed by Mr Stepan Kubiv, First Vice Prime Minister - Minister of Economic Development and Trade, provided an opportunity for Keidanren's Committee on Ukraine (chaired by Teruo Asada) to hold the 6th Japan-Ukraine Economic Joint Meeting at Keidanren Kaikan in Otemachi, Tokyo, on 22 November.

The joint meeting, which took place for the first time in three years, was attended by approximately 25 members from Ukraine and about 60 members on the Japanese side. In the meeting, proactive discussions were held on such issues as Ukraine's business environment and the possibility of promoting bilateral cooperation in specific areas including agriculture, infrastructure, and innovation.

Firstly, with regard to the business environment, views were exchanged on matters such as the institutional base that is aimed at further expanding areas related to trade and investment, as well as the current state of the business environment in Ukraine and issues related to that environment (tax system, foreign currency restrictions, and so on); and on the state of domestic reforms. Specific topics included the state of the economy and foreign investment incentives after the Japan-Ukraine Investment Agreement went into force in November 2015.

Agricultural and infrastructure fields, which have great potential

Subsequently, in the agricultural field including grains, both sides shared an understanding regarding such matters as the possibility of bilateral cooperation, as well as logistics-related challenges.

With regard to infrastructure, an area where both Japan and Ukraine have strong interests, the Ukrainian side introduced such matters as the potential of renewable energy by making use of its sizable land and capitalising on its position at the crossroads between Europe, the Middle East, and Asia in its improvement plans for its railway system, roads, harbours, and airports, and the privatisation process of state-owned entities.

In turn, Keidanren indicated its views on the possibility of cooperation, based on its proven record and extensive experience in establishing high-quality infrastructure all over the world; requests for preferential tax treatment for foreign companies that make investments in the infrastructure, and for support in raising funds; as well as the prospects for cooperation on energy-related matters, such as coal-fired thermal power and nuclear power; and also exchanged views on the direction the cooperation should take in the future.

Prospects for cooperation on innovation

Lastly, regarding the field of innovation, the Ukrainian side presented its initiatives aimed at promoting innovation, such as high-tech strategies and national programmes that make use of lower-cost ICT human resources created by the high educational standards in Ukraine, and the protection of intellectual properties.

Keidanren deepened the discussions by bringing up intangible aspects, such as spreading the awareness among employees of making improvements to work processes, for example; as well as what cooperation for innovation through the utilisation of energy-saving technologies, which is an area where Japan excels, should be like.

Prior to this joint meeting, Keidanren conducted a survey among member companies of the Committee on Ukraine regarding issues related to trade and investment between Japan and Ukraine, and prospective fields of industry, in addition to other areas of interest. Based on the results of the survey, the potential for strengthening business relations between the two countries and other matters were confirmed through concrete two-way discussions with First Vice Prime Minister Stepan Kubiv and the Ukrainian government, and various issues related to the business environment in Ukraine were raised directly. Moreover, the joint meeting was put to effective use as an opportunity to encourage improvement of the business environment.

Taking into consideration that 2017 happens to be the "Year of Japan in Ukraine," efforts will be made in conjunction with Ukraine to hold the next joint meeting in Ukraine at an appropriate date. In addition, necessary approaches will be duly made to the Ukraine government and other relevant parties considering the progress made after the Japan-Ukraine Investment Agreement comes into force.