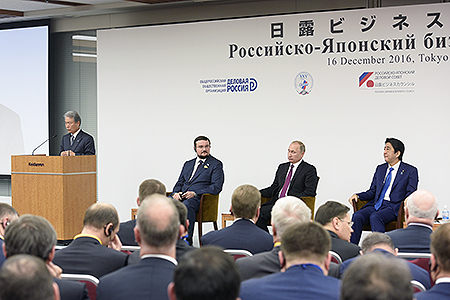 The first visit to Japan in 11 years by Russian President Vladimir Putin created an opportunity for Keidanren Chairman Sadayuki Sakakibara to invite President Putin, Prime Minister Shinzo Abe, and approximately 400 other government and business leaders from Japan and Russia to Keidanren Kaikan on 16 December 2016, for a Japan-Russia Business Dialogue plenary session. Co-hosted by Japanese and Russian business groups including the Japan Association for Trade with Russia & NIS, the Russian-Japanese Business Council, the Russian Union of Industrialists and Entrepreneurs, and Business Russia, it was an event of unprecedented scale and breadth, attended by Keidanren Chairman Sakakibara, Vice Chair Masami Iijima, and Japan-Russia Business Cooperation Committee Chair Teruo Asada, as well as Russian business leaders including Russian-Japanese Business Council Chairman Alexey Repik. The following is an outline of the discussion.

Welcome Addresses by Guests of Honour

In the future, 2016 is likely to be recalled as the year when Japan-Russia relations were put on track for dramatic expansion. As political, economic, cultural, and various other initiatives produce wide-ranging results, President Putin's visit to Japan is a historic event that will guide Japan-Russia relations to new heights.

My aim is to forge a relationship where Japan and Russia can develop together, based on the principle of mutual benefit. I hope that we will extend our partnerships across a broad spectrum of fields, foster close relationships of trust between our two peoples, join in creating prosperity for the Asia-Pacific region underpinned by strong cooperative relations, and contribute to regional stability.

Japan is an important partner for Russia in the Asia-Pacific region. It is our sincere aspiration to strengthen and deepen Russian-Japanese ties and to expand mutually-beneficial economic contact between our countries.

Agreeing on the ambitious eight-point cooperation plan suggested by Prime Minister Abe in Sochi is a positive step forward. I hope that businesspeople in both Russia and Japan will continue to contribute positively to promoting multi-dimensional and mutually beneficial cooperation between our countries, and will create the conditions needed to normalise the relations between our countries to the fullest possible extent.

This year we celebrate the 60th anniversary of the Japan-Soviet Joint Declaration, a landmark that heightens the significance of this opportunity for exchange and dialogue between the business communities of Japan and Russia, which is honoured by the presence of the leaders of both countries. This dialogue is of tremendous value in advancing bilateral relations to a new dimension, and expanding and developing economic cooperation between our two nations.

Since May 2016, business groups in Japan and Russia have examined the eight-point cooperation plan, and today agreement has been reached on 68 joint projects. Our two business communities will collaborate closely to promote economic cooperation centred on the eight points and contribute to economic development in Russia.

The exchange of documents on economic cooperation between Japan and Russia held at the Prime Minister's Office today constitutes a major advance in building deeper, mutually beneficial relations between our two countries. As the Japanese proverb goes, a journey of a thousand miles starts with a single step, and the business communities of Japan and Russia will swiftly and steadily hasten to complete the remaining 999 miles.

Four panellists from each country, including Mr Asada and Mr Repik, took part in the panel discussion, which featured lively debate on challenges in building broader and deeper business ties and specific measures to implement the eight points, as well as future prospects for economic relations between Japan and Russia.