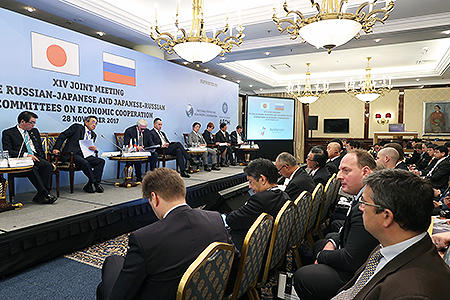 Japan-Russia Business Cooperation Committee (Chair Teruo Asada) of the Japan Business Federation (Keidanren) visited Moscow on 28 November to hold the 14th Joint Meeting of the Russian-Japanese and Japanese-Russian Committees on Economic Cooperation, co-chaired by President Alexander Shokhin of the Russian Union of Industrialists and Entrepreneurs (RSPP) and Chair Asada. 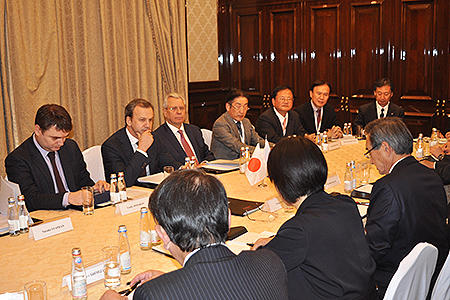 With the "eight-point cooperation plan" (note 1), presented by Prime Minister Shinzo Abe to President Vladimir Putin at the Japan-Russia Summit Meeting in Sochi in May 2016, acting as the catalyst, they reached agreements on over 100 projects, etc., displaying much momentum surrounding Japanese-Russian business. Within this context, Deputy Prime Minister Arkady Dvorkovich was invited as a guest to the meeting which was held for the first time in five years, and lively discussions were conducted by the 77 participants from the Japanese side and the 93 participants from the Russian side.

In addition, prior to the visit, an inauguration ceremony for the participants was held on 15 November, where there were briefings on Russia's internal affairs and foreign relations, Japan-Russia economic relations, etc., from Director-General Yasushi Masaki, European Affairs Bureau of the Ministry of Foreign Affairs, and Director-General Shigehiro Tanaka, Trade Policy Bureau of the Ministry of Economy, Trade and Industry.

A summary from each session of the Joint Meeting is as follows.

Japanese-Russian Cooperation and Modernization of the Russian Economy

In the first session, opinions were exchanged on how Japanese-Russian cooperation should be in modernizing the Russian economy.

As part of its import-substitution policy aimed at breaking its dependence upon resources and energy, the Russian side explained matters related to special investment contracts and export support under the Law on Industrial Policy in the Russian Federation, support systems for foreign corporations that invest in Russia, etc. In addition, with the "Joint Statement regarding Cooperation in Digital Economy" (note 2) of the Japanese and Russian governments in mind, initiatives towards the Russian economy's digitalization and ideas on techno-parks and such were introduced.

In response to this, the Keidanren side explained specific issues regarding local production by Japanese companies operating in Russia and the root causes (lack of success cases, lack of Japanese speaking personnel, etc.) behind the stagnating investment in Russia, all the while emphasizing Japan's potential, etc., to contribute to the digital economy through Society 5.0, etc.

Cooperation in Priority Sectors of the Economy

In the second session, the current state of businesses for fields included in the eight items of the "cooperation plan" such as infrastructure, healthcare, agriculture, resources and energy, transportation, urban infrastructure, and human exchanges were introduced, while opinions were exchanged upon the potential, outlooks, etc., of Japanese-Russian cooperative industries.

The Keidanren side specifically requested the introduction of mechanisms to release infrastructural maintenance for railroads, airports, harbours, roads, water and sewerage systems, power plants, etc., to the private sector through public private partnerships (PPP), concessions, etc., which has become a serious bottleneck in expanding and deepening Japanese-Russian trade and investment relations, in addition to relaxing visa requirements from the perspective of expanding human exchanges.

In the third session, discussions were held on measures, etc., promoting interregional cooperation in order to attract investment to regions such as the Russian Far East.

While the Keidanren side introduced its future outlook concerning issues surrounding expanding its businesses mainly in the Russian Far East, developing logistics networks, and opening up the Arctic Sea Route on the one hand, the Russian side explained the current status of business environments being promoted in various regions starting with the Russian Far East and concrete measures to eliminate causes inhibiting investments. 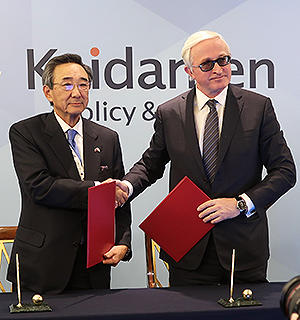 According to the World Bank's "Doing Business 2018," Russia's business environment has steadily improved from when it first joined the World Trade Organization (WTO) in 2012 at 120th, to 35th in the most recent report. However, Japanese investment in Russia has been sluggish when compared to other countries' investments.

At this assembly, discussions with RSPP, headed by President Shokhin, and Russian federal/regional government officials, etc., broke through unprecedented grounds from the perspective of expanding and deepening win-win businesses between Japan and Russia. Upon first sharing recognition of the reality of and issues related to stagnating investments, a course of action that will create a virtuous cycle in the medium to long term was confirmed called "increasing Japanese-Russian trade and investments and further improving the business environment," which will eliminate obstacles that Japanese companies face, one at a time.

Before and after these sessions, Keidanren representatives met individually with Russian Federation government officials who hold the keys to Japanese-Russian economic relations such as Deputy Prime Minister Arkady Dvorkovich, Minister of Economic Development (and Special Representative for Trade and Economic Cooperation with Japan) Maksim Oreshkin, and Deputy Minister Vasiliy Osmakov of the Ministry of Industry and Trade, in order to conduct substantial and interactive policy dialogue.

Upon sharing recognition of the current state of affairs and issues, a course of action was determined through rigorous communication that both Japan and Russia will endeavour to further mutually understand. Of significant importance, upon explaining Russia's business environment to Japanese corporations, Minister Oreshkin expressed a desire to "visit Japan in the spring of 2018" in order to dialogue with Keidanren's member corporations.

2018 is "the Year of Russia in Japan" and "the Year of Japan in Russia." Taking into consideration the Joint Statement signed and made public on this occasion, preparations with RSPP will be made for the next Joint Meeting in Tokyo, 2018.

(Note 2) Joint Statement regarding Cooperation in Digital Economy = In September 2017 at Vladivostok, Minister of Economy, Trade and Industry Hiroshige Seko and Minister of Economic Development Maksim Oreshkin agreed to advance initiatives aiming to realize the digital economy in a wide variety of fields.