Policy Proposals  U.S. and Canada "Growth and prosperity together with Japanese companies" -- Dialogue with delegation of Mayor of San Antonio, Texas -- 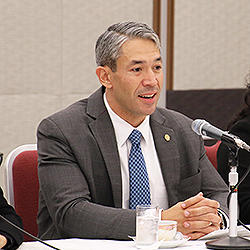 The Planning and Coordinating Sub-Committee of Committee on U.S. Affairs, Keidanren (Chairman Takashi Morimura) has met the delegation of the City of San Antonio, Texas led by Mayor Nirenberg on Nov. 19. This was the first visit to Japan for Mayor and the Keidanren's delegation had met him in Texas when they visited U.S. in the last May.

Summary of this meeting is as following;

Even though the name of San Antonio is not so common in Japan due to the absence of the direct flight from Japan, San Antonio is the 7th largest city in U.S. One of the distinguished competitiveness of San Antonio for Japanese companies which want to expand their businesses in the North American market is very enthusiastic and continuous support by the local community. Historically, San Antonio has grown together with the U.S. Armed Forces bases and they have brought many people who have lived and worked in Japan. With the presence of such people, in comparison with other cities in U.S., San Antonio is very amicable to Japanese people and therefore, it is very easy for Japanese companies to get the support by the local community.

San Antonio has rapidly grown and had superiority in rich labor force and the system of education and training to provide young generation with necessary skill and capability to work. San Antonio has multiple industries as pillars of its economy and cyber security related industry is one of them. It is evaluated as top level technology and largest accumulation in U.S. San Antonio has the Cyber Security Command of the U.S. Air Force and the 24th Air Force which are one of the resources of cyber security related industry in San Antonio with other many civil organizations.

San Antonio has been concerned about the recent trade policy of the U.S. Federal Government. We have been watching the situation of the review of the NAFTA and the trade conflict between U.S. and China because of its potential influence on Japanese companies which have already been in San Antonio or will come henceforth. We recognize the necessity to convey our concern to the Federal Government that their global trade policy will influence on the local economy of the States and the Cities.

Because of its location side by side with Mexico, many companies in San Antonio are doing businesses to take advantage of the resources in Mexico such as rich labor force and other resources. For example, in automotive industries, Tier 1 suppliers have strengthened the collaborations with Mexico, therefore, the revision of the NAFTA is a quite big issue. We will continue to do our best effort to support Japanese companies in San Antonio to avoid any problems due to the Federal Government's policy.

The trade conflict between U.S. and China is a big issue because many U.S. companies also depend on China as one of their supply chains. In the first place, international trade should be free and to restrict it will generate negative influence on the U.S. and Texas economy after all. We will advocate it to the Federal Government actively.

This year is tricentennial year for the City of San Antonio. Japanese companies are indispensable partners for us and we really hope to strengthen mutually beneficial relationships with them for continuous growth and prosperity henceforth.