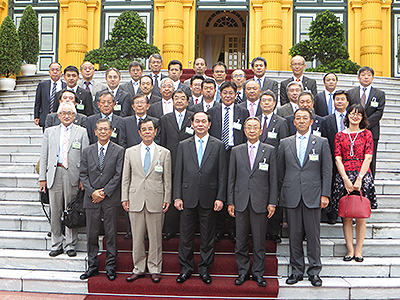 The mission held talks with the President of the Socialist Republic of Vietnam H.E. Mr. Tran Dai Quang.

With the new regime in Vietnam officially commencing in July, Keidanren sent a mission to the cities of Hanoi and Ho Chi Minh and Ba Ria-Vung Tau Province from August 22 to 24, consisting of approximately 70 business executives, led by Mr. Kyohei Takahashi and Mr. Kuniharu Nakamura, Chairs of the Japan-Vietnam Economic Committee.

The mission urged the leaders of the new regime to promote infrastructure development, to make concrete improvements to the business environment for the growth of supporting industries and the like, to bring the Trans-Pacific Partnership (TPP) into force swiftly, and to swiftly realize a Regional Comprehensive Economic Partnership (RCEP) of high quality. The mission also attended a kick-off meeting to officially launch Phase VI of the Vietnam-Japan Joint Initiative, which the two countries have been pursuing on an ongoing basis since 2003 as a framework for cooperation on improvements to the business environment in Vietnam.

In Hanoi, the mission held talks with the President of the Socialist Republic of Vietnam H.E. Mr. Tran Dai Quang, Prime Minister H.E. Mr. Nguyen Xuan Phuc, Minister of Planning and Investment Mr. Nguyen Chí Dung, and Deputy Minister of Industry and Trade Mr. Hoang Quoc Vuong. They also met with key figures in the Vietnamese public and private sectors, such as President of the Vietnam Chamber of Commerce and Industry (VCCI) Dr. Vu Tien Loc, as well as the Japan Business Association in Vietnam (JBAV) and other members of the Japanese business community in Vietnam.

During these talks, the Vietnamese side conveyed their gratitude for the role that Keidanren has played in the growth of the Vietnamese economy and the development of its human resources, as well as the strengthening of relationships between Japanese and Vietnamese companies. They also expressed their hopes for the further improvement of the business environment through the Vietnam-Japan Joint Initiative and the ongoing policy dialog between Keidanren and Vietnam's Ministry of Planning and Investment. Describing Japan as Vietnam's most important strategic partner, the Vietnamese officials pledged even further support for the activities of Japanese companies in Vietnam, and expressed their hopes for further investment and the deepening of economic exchange between the two countries. In addition, they indicated their understanding of the importance of the swift entry into force of the TPP agreement, to which both Japan and Vietnam are signatories, and of moving the RCEP forward. 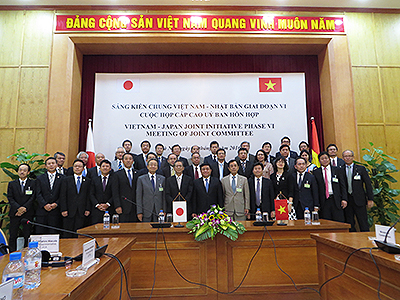 The kick-off meeting for Phase VI of the Vietnam-Japan Joint Initiative was attended by approximately 150 people from both countries, including Mr. Takahashi, Mr. Nakamura, Mr. Hiroshi Fukada, Japanese Ambassador to Vietnam and Mr. Dung, Vietnamese Minister of Planning and Investment, who jointly chaired the meeting. The meeting confirmed the establishment of five working teams that will focus on (1) employment, (2) salary, (3) transportation and logistics, (4) service industry, and (5) support for small and medium enterprises. It was also decided to continue discussions on the addition of two more topics, namely the (6) Law on Investment and the Law on Enterprises, and (7) the pharmaceuticals distribution industry. A memorandum of understanding was signed to the effect that the governments and private sectors of both nations would cooperate fully in discussions within the joint initiative for the next eighteen months.

In Ho Chi Minh, the mission held talks with Mr. Le Thanh Liem, Vice Chairman, People's Committee of Ho Chi Minh City, as well as with the Japanese Business Association of Ho Chi Minh (JBAH). Mr. Liem expressed high praise for the first line of the Ho Chi Minh City Metro subway, which is being built by Japanese contractors, funded by Japanese ODA. He also expressed hopes for more investment from Japan in the areas of infrastructure development such as electric power and transport, and the IT, high-tech, and agricultural sectors.

In Ba Ria-Vung Tau Province, where the Japan International Cooperation Agency (JICA), is assisting with the establishment of an economic development strategy, the mission met with Mr. Nguyen Hong Linh, Committee Secretary and Provincial People's Committee Chairman, BA RIA-Vung Tau , and toured an industrial complex, to gather information about the local business environment and other matters. Mr. Linh said that he hoped that Japanese companies would set up businesses in Ba Ria-Vung Tau Province in a range of sectors, including the heavy and chemical industries, environment, logistics, and tourism.

The mission was a major step forward in the expansion and deepening of economic ties between Japan and Vietnam. Keidanren will continue to strengthen its relationship with Vietnam going forward.