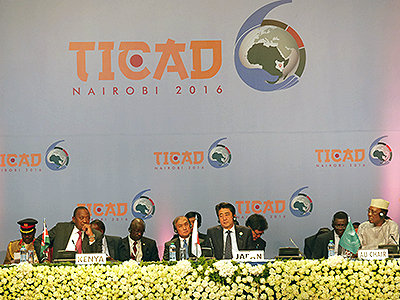 The Sixth Tokyo International Conference on African Development (TICAD VI), co-organized by the Government of Japan, the United Nations, the World Bank, the United Nations Development Programme (UNDP), and the African Union Commission (AUC), was held on August 27 and 28 in Nairobi, Kenya. TICAD is an international forum on the theme of African development launched by Japan in 1993, and this was the first time it was held in Africa.

At the Opening Session, President Uhuru Kenyatta of Kenya stated, "For the African market to achieve high growth and prosperity, we must press for free and fair trade and for deeper economic integration, and develop and utilize the human resources who support economic growth." This was followed by Prime Minister Shinzo Abe's address. The Prime Minister noted, "To build a quality, resilient, and stable Africa, the public and private sectors will collectively contribute to implement programs, including quality infrastructure development, which is a strength of Japan, and human resource development for approximately 10 million people who support industries." 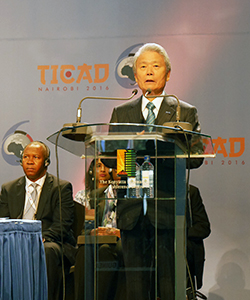 On August 28, a policy dialogue took place with the private sector, attended by Prime Minister Abe, President Kenyatta, leaders of other African countries, and members of the business community from Japan and Africa. Chairman Sakakibara delivered a keynote address in which he stated, "Africa has achieved strong economic growth underpinned by its rich natural resources. Furthermore, it has a population exceeding 1 billion people and a growing middle class. Driven by these factors, Africa is home to a burgeoning massive consumer market that holds much promise and is gaining global attention. With TICAD VI as a turning point, Japanese companies will build upon their strengths and coordinate with the Japanese government in collaborating to promote Africa's development in such areas as human resource development, quality infrastructure development, and the strengthening and industrialization of the agriculture and fishery industries." In addition, the Chairman announced the TICAD VI Business Declaration that enshrines the Japanese business community's continued commitment to forge a stronger partnership with Africa.

Keidanren will conduct follow-ups of TICAD VI to further deepen economic exchanges between Japan and Africa, and collaborate on efforts to further improve the business environment in Africa based on the Business Declaration.