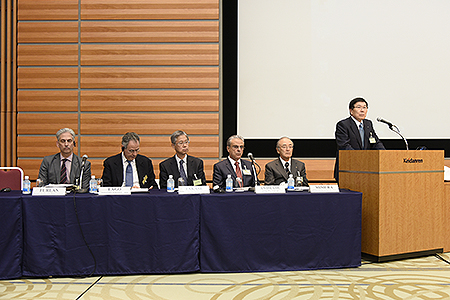 On October 4 and 5 at Keidanren, Tokyo, the Japan-Brazil Economic Committee (Chairman: Masami Iijima) of Keidanren hosted a joint meeting of the Brazil-Japan Economic Cooperation Committees with the National Confederation of Industry of Brazil (CNI). From Brazil, approximately 60 people attended, including Mr. Robson Braga de Andrade, President of CNI; Mr. Murilo Ferreira, Chairman of the Brazil-Japan Economic Committee of CNI; Mr. Fernando Furlan, Executive Secretary of the Ministry of Industry, Foreign Trade and Services; and Mr. Andre Correa do Lago, Ambassador of Brazil to Japan. From Japan, approximately 140 people attended, and Mr. Yasushi Takase, Director-General of the Latin American and Caribbean Affairs Bureau of the Ministry of Foreign Affairs, and Mr. Satoru Sato, Ambassador of Japan to Brazil, delivered guest addresses. An overview of each session is as follows.

Participants from Japan and Brazil expressed the view that conclusion of the Japan-Brazil EPA is needed and should start a dialogue on this issue as soon as possible. In addition, Japan proposed that a bilateral investment agreement be comprehensive including not only investment protection but also investment liberalization. It was agreed that Keidanren and CNI would carry out scoping based on their joint report, "Brazil-Japan: Roadmap for an Economic Partnership Agreement," issued in September 2015.

Concrete examples were presented regarding Japan-Brazil joint ventures and technology cooperation in the field of bioenergy that makes use of Brazil's abundant supply of agricultural products. Also, high efficiency coal-fired power generation is one of the critical source of electricity for Brazil that relies on hydropower for much of its electricity. Keidanren and CNI concurred that they would aim to deepen the mutually beneficial relationship between the two countries by harnessing the advanced technologies of Japan.

Japan, giving the example of the automobile industry, proposed mitigating the local content requirements in order to promote the use of eco-cars, as well as reducing tariffs on equipment and other items for cutting production costs. Keidanren and CNI agreed that developing the business environment is inextricably linked to promoting trade and investment, and that they would promote the development of the business environment with the goal of realizing the future Japan-Brazil EPA and bilateral investment agreement.

Japan and Brazil shared the view that cutting distribution costs through infrastructure development is a top priority. Japan requested consistency in the policies implemented since the previous administration in Brazil, and requested the early resumption of long-term loans in light of the interruption of some existing infrastructure projects due to the suspension of government loans by the Brazilian Development Bank (BNDES).

Sectors in which Japan and Brazil can make the most of their technological capabilities were introduced, including "Society 5.0" and hydrogen technologies from Japan as well as IT, software, and outer space from Brazil. Keidanren and CNI examined the potential for bilateral cooperation.

The outcomes of the Joint Meeting were reported to President Michel Miguel Elias Temer Lulia of Brazil on October 19 during his visit to Japan.