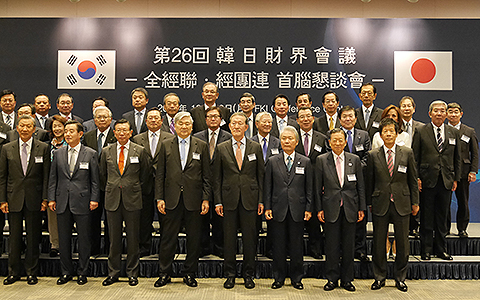 Keidanren held a meeting with the Federation of Korean Industries (FKI), on October 10 in Seoul, the Republic of Korea. The meeting was attended by 18 Keidanren representatives, including Chairman Sakakibara, and 18 FKI representatives, including Chairman Mr. Huh Chang-Soo. In that afternoon, the Keidanren delegation held meetings with Korean President Park Geun-hye and Minister of Trade, Industry and Energy Joo Hyung-hwan.

Towards the further enhancement of Japan-Korea economic cooperation

At the meeting, they discussed on medium- to long-term challenges towards the further economic growth of the two countries and cooperation measures for resolving these challenges on the basis of the mutual understanding and trust relationship that their business communities have deepened over many years.

The summit began with Keidanren and FKI introducing government economic policy of Japan and Korea as well as reporting on their recent economic situation.

In the following sessions, a candid exchange of views took place on strengthening the growth and competitiveness of the two countries through industrial cooperation, including Japan-Korea economic cooperation in the global market.

With regard to Japan-Korea cooperation in the global market, the both sides affirmed that economic integration in Asia is essential for sustainable growth in Asia. Keidanren underscored that close cooperation between Japan and Korea is critical for swiftly concluding a high quality Japan-China-ROK Free Trade Agreement (FTA) and Regional Comprehensive Economic Partnership (RCEP).

On the issue of strengthening Japan-Korea business cooperation in third-country markets also discussed at the preceding business summits, the two sides agreed to hold a relevant seminar in Seoul in spring 2017 to share case studies from both countries and deepen understanding of their public support system, etc. that support joint development for global market.

Furthermore, the two sides exchanged views on expanding their cooperation on future growth industries, in addition to cooperation in tourism and the service industry, recognizing that industrial cooperation between the two countries is indispensable for their sustainable growth and strengthening their competitiveness. As a result, the both sides agreed that in the area of science, technology, and innovation that form the foundation of sustainable growth, they would make efforts to expand cooperation in a mutually beneficial manner, as well as promote personnel exchanges between the two countries that include employment and internship of young people.

In addition, the two sides agreed that businesses would provide maximum cooperation to forge an unwavering Japan-ROK relationship, including holding the Japan-China-Korea Business Summit on the occasion of the Japan-China-ROK Trilateral Summit.

The business summit was brought to a close with the compilation of a joint statement based on the se discussions.

Meetings with President Park and Minister of Trade, Industry and Energy Joo

Following the business summit, the Keidanren delegation including Chairman Sakakibara held meetings with President Park and Minister of Trade, Industry and Energy Joo.

At the meeting with President Park, the delegation briefed the President on the Business Summit with FKI, and requested the deepening of stable and favorable political and diplomatic relations that would serve as a foundation for further strengthening economic cooperation between Japan and Korea. In addition, the delegation requested the swift conclusion of the Japan-China-ROK FTA and RCEP at a comprehensive and high level, in order to promote bilateral cooperation in third-country markets and further expand bilateral trade and investment. Additionally, the delegation conveyed that the Japanese business welcomes Korea's participation in the Trans-Pacific Partnership (TPP).

President Park welcomed that Keidanren and FKI would continue to maintain close exchanges and develop a future-oriented win-win relationship. Furthermore, the President expressed expectations towards Japan-Korea economic cooperation in wide-ranging fields including: expanded trade of final consumption goods; expanded Japanese investment in Korea; cooperation in third-country markets such as in the fields of infrastructure and natural resource development, entertainment, and healthcare; development of new industries; and innovation.

With regard to the TPP, Minister of Trade, Industry and Energy Joo stated that Korea was undertaking preparations to join the TPP.